Farmers are doing the biggest job on earth to feed an ever-growing population while also having to balance the effects of climate change and the demands of a changing world. In this featured story, we take a closer look at the hype around carbon farming. Carbon farming is seen as a solution to mitigate climate change by promoting practices that avoid releasing greenhouse gases into the atmosphere as well as those that sequester carbon. Kasey Bamberger, a third-generation farmer and Managing Partner of Bryant Agricultural Enterprises in Ohio, explains the farm’s experiences with a few of these practices that promote soil health and keep carbon in the soil: no-till and cover crops.

Kasey Bryant Bamberger is not the first person who comes to mind when most people think of the term “farmer.” In a world of overalls, she’s more likely to be seen out in the fields wearing a striped sundress with bright purple work boots. Yet Bamberger, the only one of four sisters involved in her family’s third-generation farm, is as passionate as it gets as she tackles the biggest job on earth, helping produce enough food for a rapidly growing world population. “I always grew up around agriculture, but during that time, it wasn’t very common to have women returning to the farm,” said Bamberger, whose farms span six counties in southwest Ohio. “Farming keeps you on your toes. We’re faced with many variables that are out of our control. In my eight years here, we’ve received a different weather pattern every single year.”

The effects of climate change are impacting farmers like Bamberger across the United States. Extremes such as droughts, floods, and strong winds are becoming more common. “Every year, we go into to growing season with a plan,” said Bamberger, whose family manages 20,000 acres of corn, soybeans, and soft red winter wheat. “But we’re fully aware Mother Nature might have a different one.” Bamberger says that requires a lot of data-driven decisions and experience. “Our springs have become a lot shorter and harder to manage because of heavy rainfalls,” she said. “The planting window has become narrower, requiring more equipment and more people to do the work in a shorter timeframe.”

More than just a farmer

These days, farmers are much more than just farmers. They’re agronomists, meteorologists, soil experts, and so much more. They must balance the effects of a changing climate and the demands of a changing world. They’re the original stewards of the land and their livelihood is inextricably linked to a healthy environment. “Taking care of the environment, taking care of the soil is hands down the most important thing to us as an operation and to every American grower,” said Bamberger. “Every grower around the globe will utter the same sentiment, because this is our livelihood.” The idea of healthy soil is not new in farming but it’s the driving force behind today’s carbon craze. Scientists and thought leaders believe farmers, those implementing carbon farming practices. are in a unique position to be part of the solution to a warming climate. 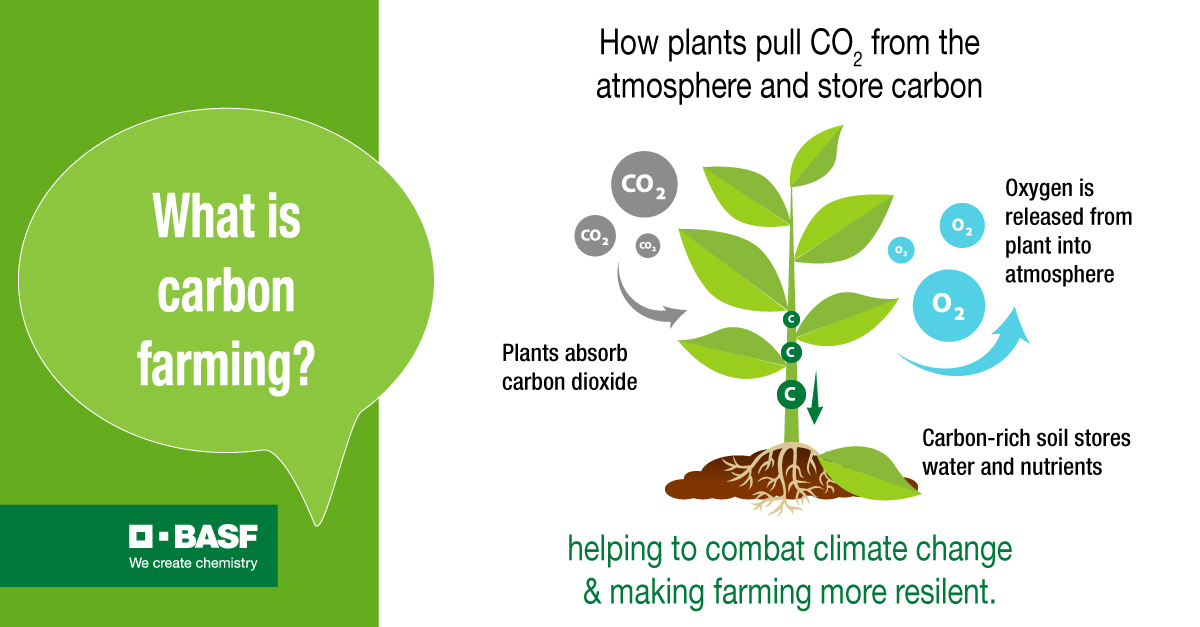 As plants grow, they pull carbon from the atmosphere, soil soaks it up and stores it. The amount of carbon stored varies significantly across soil type and climate but generally the more carbon captured in soil, the more fertile it becomes. Simply put, carbon farming is sustainable farming practices that improve soil health, reduce greenhouse gas emissions (emissions avoidance) from crop production and increase carbon stored in the soil (carbon sequestration). Carbon farming programs offer financial incentives to farmers to implement the needed agricultural practices and the incentives are often carbon credits that can be traded in the carbon market.

At the virtual Leaders’ Climate Summit in April 2021, President Joe Biden emphasized the importance of agriculture in carbon reduction. “I see farmers deploying cutting-edge tools to make soil of our Heartland the next frontier in carbon innovation,” said President Biden. Agriculture is both a victim and contributor to climate change. According to U.S. Environmental Protection Agency, agriculture and forestry emit around 10.5 percent of total U.S. greenhouse gas (GHG) emissions. On the other hand, it has a role to play in curbing GHG emissions.


There’s been much discussion about how to create a way for farmers to earn credits for the climate-friendly practices they’ve implemented, or will implement, in their operations.

Soils and climate change are intimately linked. There are more soil microorganisms in a teaspoon of healthy soil than there are people on the planet. Behind oceans, soils are the second largest reservoir of greenhouse gases on earth. Soils not only help to remove CO2 from the atmosphere but can also help farming operations be more resilient to increasingly unpredictable weather patterns. Healthy soils make farmland more productive, reduce soil erosion, and improve soil structure, thus improving the quality of ground and surface waters.

Traditional farming methods that sequester carbon, such as minimal or no plowing of fields (no-till), rotating crops, and planting cover crops, have existed for millennia. So, what’s causing the hype around carbon farming? Money.

Carbon stored in soil could soon become its own commodity crop. As large companies look to offset their greenhouse gas emissions by paying for sequestration and removal, the demand for carbon credits is accelerating worldwide. Farmers are not only feeding the world but also are running businesses and want to capitalize on this potential new revenue stream. “The carbon industry right now almost seems a little bit like the Wild Wild West,” said Bamberger. “There’s a lot of new information rolling out to growers that looks to agriculture as the solution to reducing our carbon footprint. I believe we can help be the greatest solution, but I’m just worried about the rules and regulations that will be passed. My hope is that they won’t be rolled out too quickly.”

Many of the technologies and practices used to generate carbon credits are only cost effective when done on a massive scale. According to Bamberger, farmers normally implement new practices in incremental steps. “We started to introduce no-till practices about three years ago on parts of our farm to learn about cover crops,” said Bamberger. “Understanding what cover crop species will work in our area has been a windy road. We’ve done a lot of trials on different cover crop mixes, different species and different parts of the field to try to learn more about the species and how they work on our farm. This helps us to not have a negative effect, so that cover crops do not get quickly out of hand. If so, this could prevent us from planting on time which is essentially what we are trying to avoid.”

Crop protection is a must

Crop protection technology, such as herbicides, plays an important role in helping farmers implement carbon-farming practices. Bryant Agricultural Enterprises has partnered with BASF, which has the broadest range of herbicides in the industry, in a wide array of crop protection initiatives. “It’ll be very difficult for us to grow the number of bushels of any crop needed without the use of herbicides,” said Bamberger. “With an increasing population that requires food, fuel, and fiber, it will be detrimental if we remove the capability to use herbicides. Even as we transition to no-till farming and plant more cover crops, herbicides play an even more critical role. Digital technology has allowed us to spray weeds in a targeted way and not in entire fields. We’re applying significantly less inputs today than just six years ago.”

If implemented on a larger scale in the United States, agricultural soils could draw down more 250 million metric tons of atmospheric CO2 annually according to The National Academy of Sciences. This will require universal standards for measuring, reporting, and verifying agricultural carbon credits and incentives. For now, several companies are banking on carbon with carbon payment programs.

Bamberger is just one of many next-generation farmers continuing the legacy of land stewardship. “We continue to challenge ourselves to produce crops in a safe and sustainable manner, while making sure decisions we’re making are operationally profitable and environmentally friendly,” said Bamberger. “We know as the world population increases, it’s more important than ever to continue to take care of our soils and environment while producing high-yielding crops.”

Agriculture has a big role to play in reducing carbon emissions, but it will take multiple industries coming together to make carbon farming a reality on a larger scale.

One thing’s certain… the young farmer wearing a striped sundress with bright purple boots will continue to do her part when it comes to climate smart farming.

The Global Carbon Farming Program will support BASF’s commitment to reduce the carbon footprint per ton of crop produced by 30% by 2030 in wheat, soy, rice, canola and corn. BASF will launch its program in phases starting in 2022. It will promote sustainable agricultural practices and foster the best use of BASF’s holistic portfolio for farmers – from seeds, traits, innovative chemical and biological crop protection products, to digital farming and fertilizer management solutions. The program will be underpinned by sustainability tools for directing and assessing improvements helping farmers to make balanced decisions towards improved sustainability contributions. It will help farmers to reduce on-farm emissions and sequester more carbon into the soil. In addition, BASF will build the global framework to allow farmers to generate carbon credits from recognized certifiers that will lead to second revenue streams from their carbon reduction efforts.

We believe farming is the biggest job on earth. As it gets more complex and more important, we are committed to finding the right balance, so that farmers, our industry and future generations can all flourish.

BASF encourages people to join in the engaging dialogue and share their perspective about food and the future of the agriculture industry.